From The Detroit Free Press: 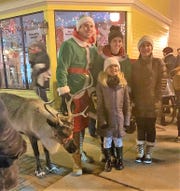 A live reindeer was used during Plymouth’s Mistletoe Market on Dec. 5. (Photo: Courtesy of Molly Tamulevich)

The Humane Society of the United States supporters want Plymouth to ban the use of live animals at future events.

Animal-rights activists are decrying the presence of a live reindeer last month at a downtown Plymouth holiday event, arguing it posed a dangerous threat to the public and the health of the animal.

Michigan State Director of The Humane Society of the United States Molly Tamulevich and four other advocates addressed the Plymouth City Commission Monday, urging the commissioners to create an ordinance prohibiting future live-animal exhibits, emphasizing that placing an animal in an out-of-its-element setting is potentially harmful to the public and the welfare of the animal.

Ferndale and Eastpointe are the only two Michigan municipalities to enact such an ordinance, Tamulevich said, adding that Plymouth could be among the animal-rights front-runners if an ordinance was passed. 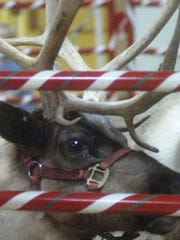 Santa’s reindeer made a stop at Addams Elementary Early Childhood Center in this file photo. Animal-rights activists addressed Plymouth officials this week, asking them to ban the use of live animals for entertainment in the city. (Photo: John Stormzand | Staff Photographer)

“Whether it’s a circus, a traveling tiger show or a reindeer posing for photos on a city sidewalk, exhibits that feature wild animals threaten public safety by bringing people dangerously close to powerful, unpredictable and stressed wild animals who, all too often, take every opportunity to lash out or escape,” Tamulevich said. “As has been repeatedly demonstrated, trainers cannot protect themselves or the public when a wild animal rebels.”

The reindeer used in Plymouth’s Mistletoe Market event was rented by the Plymouth Chamber of Commerce from Carousel Acres in Green Oak Township. The company’s website lists reindeer-rental pricing at $350 for one hour, $475 for two hours and $600 for three hour, which includes one reindeer and two “elf handlers,” the website adds.

Chamber President Wes Graff declined to comment on The Humane Society for the United State’s concerns.

While stating her case to the commissioners, Tamulevich cited reindeer-involved incidents, including an occurrence in South Dakota that included a reindeer used in a Santa Claus display lifting a man with his antlers and carrying him around for 45 minutes before the animal could be subdued.

A Google search for reindeer attacks reveals a 1997 article referencing a South Dakota man “rescued from love-struck deer” but no other such incidents were found.

‘Disappointing’ development
Plymouth resident and Humane Society for the United States district volunteer Kyla Cruz told the commissioners she was “disappointed to see that wild animals are being used for entertainment” in Plymouth.

“What got me quite concerned was the behavior of the reindeer,” Cruz said. “It appeared to be drugged up and lethargic.”

Tammy Iaconelli, the owner of Carousel Acres, said the animal-rights advocates are misinformed about the way her business uses animals.

“First of all, to say the reindeer was drugged is wrong; it was not,” said Iaconelli. “Silver Belle is a tame, domesticated reindeer. We take them to day care centers, nursing homes.”

Iaconelli said the engagement between people and the animals is often heartwarming.

“We took Silver Belle to a nursing home recently,” Iaconelli explained. “There was a woman who had not moved since suffering a stroke six months earlier who reached out and touched the reindeer. Animals have a way of connecting with people, especially children and older individuals.”

Iaconelli added that her business is licensed by the Department of Natural Resources and the United States Department of Agriculture.

Cruz asked the commissioners whether the excitement generated by the reindeer’s presence was worth the potential danger to the animal and the public. 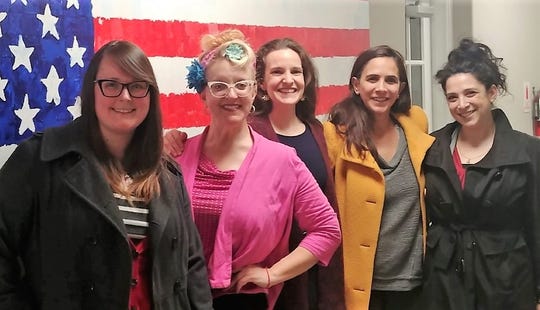 “Plymouth has clearly demonstrated an ability to host engaging and successful programs without live animals,” she said. “I hope you decide to follow Ferndale and Eastpointe and come up with an ordinance that would ban the future use of live animals for exhibition purposes.”

Debra Levantrosser, owner of Plymouth’s Shimmy Shack vegan restaurant, said an ordinance protecting wild animals from being exhibited in public should be especially important for a city like Plymouth.

“Why Plymouth?” Levantrosser asked. “Because Plymouth is known far and wide as a family-centric city, which is why Plymouth needs to take a leadership role here.

“Would this holiday event been as successful without the reindeer? Yes, of course it would have.”

Plymouth Mayor Oliver Wolcott assured the animal-rights advocates that the commissioners do listen to public comments and take them very seriously. The commission did not discuss the issue further or take action on it at Monday’s meeting.